Thoughts on Guitars and Music 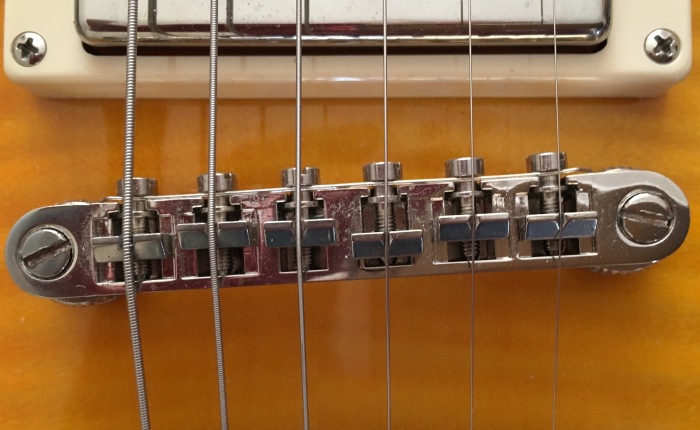 If you think about it, getting a piano to play in tune is a simpler concept than getting a guitar to play in tune. This is because, on a piano, all the notes are ready made: eighty-eight of them all lined up, and all you have to do is tune each of the strings (or group of 3 strings for higher notes) correctly and you’re ready to go. Obviously, this is a huge simplification of the enormous skill required to properly tune a piano, but we’re talking conceptually here.

With a guitar, only six notes are prepared in advance: the open strings. All the other notes have to be made by altering the length of the strings, which is achieved by pressing them against the frets. And this is where the concept is more difficult: all of the notes being in tune relies on the fretboard being properly calibrated so that the frets are exactly a semitone apart, on the bridge and saddle (or saddles) being in the right position so that the octaves at the 12th fret are in tune, and, just as crucially, on the nut being in the right place so that the first few frets are in tune.

For the last few decades, the use of computer numeric control (CNC) machines has become the norm in guitar factories for many operations, including calibrating fretboards. This has led to greater consistency, more efficient use of materials, and very accurate fretboards, so when guitars have tuning problems (and they do, from budget models to top of the line) the issue is virtually never the fretboard.

There can be problems with the bridge, but not often. On electric guitars bridges are usually fully adjustable for action and intonation, so a bit of time spent with a screwdriver, an allen key, and a tuner will sort out your octaves at the 12th fret. Stratocaster style bridges, like this: 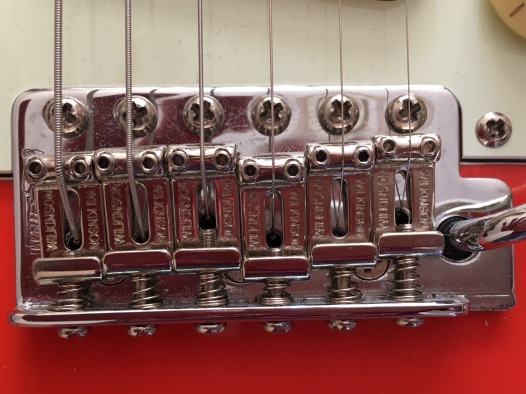 have plenty of forward and backward travel in the saddles, so there’s almost never an issue there. Gibson tune-o-matic style bridges, like this: 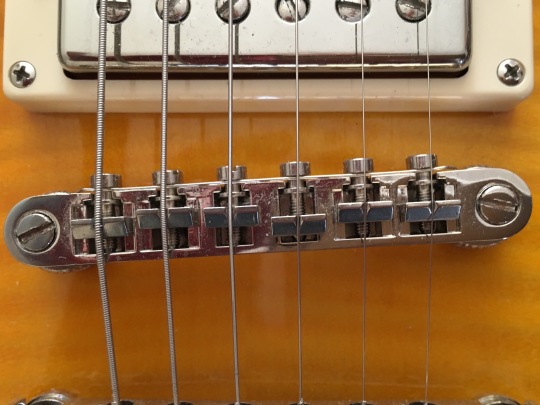 have less travel in the saddles and, occasionally, a saddle will run out of room before the intonation is correct. In this instance there are bridges available with more saddle travel that fit directly in place.

Acoustic guitar bridges are a different proposition, as they’re glued to the top of the guitar with a slot routed for the saddle. Compensated saddles are pretty much ubiquitous these days, usually with the low E and B strings sitting further back than the other strings, like this: 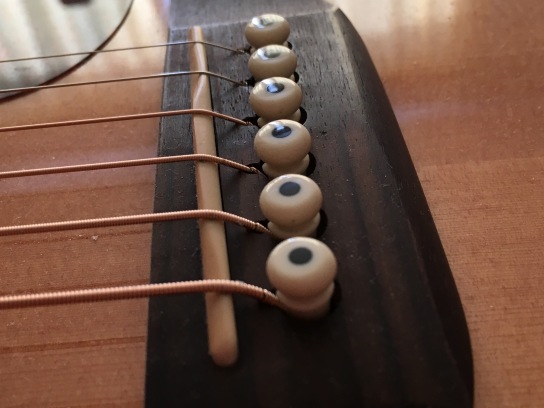 and, for the most part, they work fine. Sometimes it might be necessary to slightly reshape the top of the saddle, but that’s fairly easily done.

Every once in a while, a bridge will be put on in slightly the wrong position. In the case of my Sigma SDR-28H, the bridge is just under 2 millimetres too far back, the upshot being that, even with the saddle shaped so that all the strings sit at its front edge, the D, G, and high E strings were all slightly flat at the 12th fret. Filling the saddle slot and routing it in the correct position wasn’t an option because the saddle is close to the front of the bridge. I decided to make some little extensions for the strings in question and glue them to the front of the saddle. Here’s how it ended up: 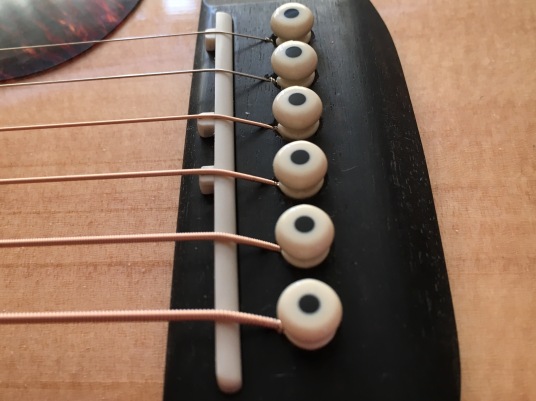 It took a lot of time and patience to shape these little pieces (which are made from GraphTech Tusq, the same material as the saddle) and adjust them so that the 12th fret octaves were in tune. I also had to make sure that the string heights remained unaltered at the points where the strings pass over the extensions, which meant reshaping the back of the saddle slightly at those points, but it all worked out fine, and the guitar is now in tune at the 12th fret on all the strings.

Often though, all this is not enough. How many guitar players have spent time setting up their guitars, carefully adjusting the action and intonation, only to find that they can’t get open chords to play in tune? I certainly have. The problem in this case is with the nut, an area of guitar setup which is often overlooked, and I’ll be dealing with this in Part II (b). 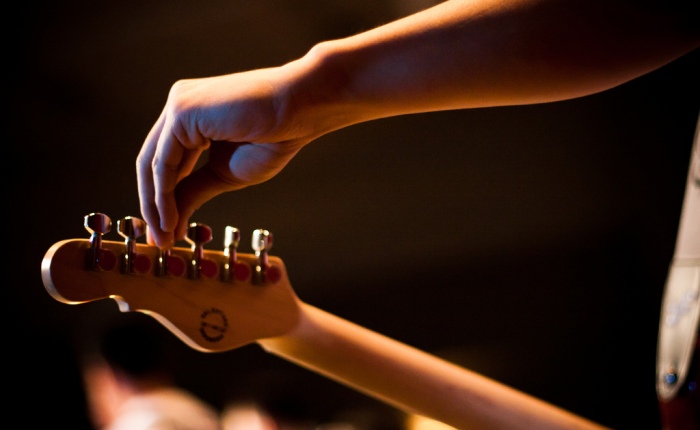 There’s an old joke that says: “Guitarists spend 90% of their time tuning, and the other 10% playing out of tune”. There’s certainly some truth in this because, as much as we love guitars, there’s nothing can drive us to near insanity like trying to get them in tune.

Most of the tuning problems that guitarists encounter stem from two sources: 1) a lack of understanding of the equal temperament tuning system that the vast majority of western music employs, and 2) flaws in a guitar’s construction. I’m going to tackle the first of these in a fairly simple way in this post, and deal with the second in Part II.

Equal temperament tuning is the system which has been used since about 1750 whereby, for instruments of fixed pitch (like piano and guitar, where the smallest interval you have is a semitone), the octave is divided into 12 equal semitones. This means that, when playing chords, some notes sound slightly out of tune (some more than others) but the amount of out of tune-ness is the same for all chords in all keys.

Think of it this way: on a guitar (and a piano), F# and Gb are the same note, but strictly speaking, they’re not. There is a gap between them (an example of a phenomenon called the Pythagorean Comma), but equal temperament tugs at the ends of both notes and pulls them together. This is why, for example, the F# note on the second fret of the high E string sounds perfectly in tune as the root of a first position F# chord, but sounds quite sharp as the major 3rd of an open D chord. The same note will also sound very slightly flat as the 5th of a first position B minor chord. In fact, for all of these chords to sound perfectly in tune, each F# note would have to be slightly different, and the same also goes for all other notes. Achieving this would mean that a guitar would need to have about 30 frets to the octave rather than 12, which is not really a practical proposition.

So, what we’ve ended up with is a tuning system where, in all chords in all keys, 5ths are 1.96 cents flat of the pure pythagorean intervals, 4ths are 1.96 cents sharp, and Major 3rds are 13.69 cents sharp of the pure interval. That’s more than an eighth of a semitone sharp (a cent being one hundredth of a semitone), which is why those of us who are sensitive to tuning struggle with them. In fact, in equal temperament tuning, the only intervals which are (or should be) perfectly in tune are octaves and unisons. This table shows the difference between the pure or “just” intervals and the tempered ones. 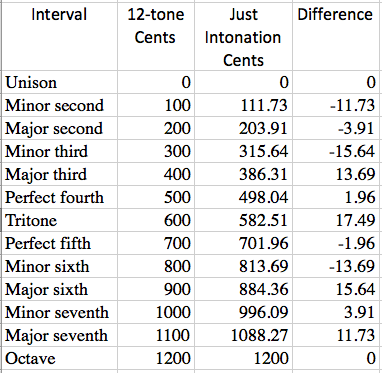 This is why tuning to a chord doesn’t work. The tendency will be to tune the chord to pure, rather than tempered, intervals, which will make all other chords sound terrible. If you’re tuning by ear, only unisons and octaves should be used. The thing to do is to get used to how chords sound in equal temperament; to train your ear and learn to expect that Major 3rds are going to sound sharp and 5ths flat, and so on. Do this, and you’ll be much happier with your guitar.

All this, of course, depends on your guitar being set up properly, and any flaws in its construction being dealt with, which I’ll talk about in The Joys and Pains of Tuning Part II.